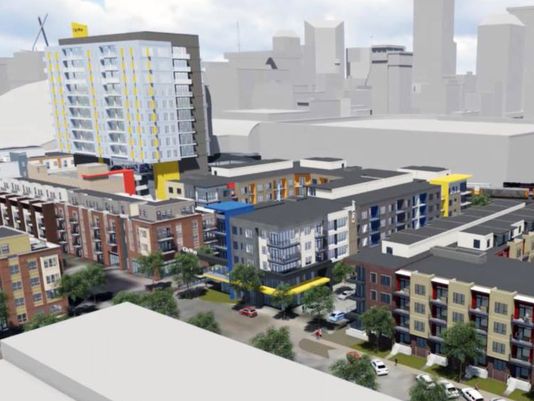 Buckingham Companies recently released plans for phase two of their ambitious redevelopment of south downtown. The $110 million project will add more than 450 apartments and contribute to connecting the Eli Lilly campus and Fletcher Place to the central business district. Of particular note in this rendering is the addition of what looks to be an 11 story tower to the north garage, a definite welcome addition to the south downtown skyline.

In my opinion, CityWay should have been named something less corporate-sounding but the act of branding an entirely new neighborhood seems to be thus far successful with the brand new YMCA complex on South St. already built -no doubt a by-product of the area’s renaissance.

Assuming this project is green-lighted by city government, it will be exciting to see the impact it will have on the South St. corridor between East St. and Meridian. With the Cultural Trail on its backside alongside Virginia Ave, increased infill will absolutely supplement the resurgence of that corridor. The addition of perhaps a thousand new residents brings an exciting prospect of added vibrancy to the area, encouraging further commercial development and “eyes on the street”, with citizens of the ‘hood walking to work and shopping. This, in effect, will build a greater sense of place and firmly establish south downtown as a destination.

A devotee of urban development in Indianapolis. View all posts by Jeffery Tompkins

This site uses Akismet to reduce spam. Learn how your comment data is processed.