“Cummins’ innovative design for its new downtown Indianapolis campus will serve as an anchor for redevelopment in the Market East district and bring new vitality to the area, this project raises the bar for architecture in Indy and will stand as a bold and visually compelling gateway into the city.” – Mayor Greg Ballard

Project will include the rehabilitation of the four-story Old City Hall which is located near the corner of Alabama and Ohio streets, and the construction of a more than 100,000-square-foot, 10-story addition on an adjacent parking lot. The deal is contingent on the city’s approval and attaining financial incentives. 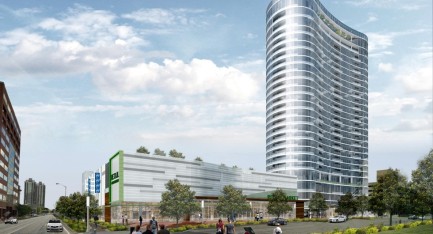 Corner of Market St. and Alabama St. | The tower will feature some of the most expensive rents in Indianapolis. Projected rents will run from about $1,600 a month for the most modest units to more than $4,000 for penthouse suites with stunning skyline views. Whole Foods has committed to become the ground floor anchor

The Collegiate | 11 stories | Michigan and Capitol | Under construction

The project is an upscale 193-unit, 669-bed community due to open in Fall 2017 catered for IUPUI students, includes two buildings ranging from five to eleven stories. It will boast 3,100 square-feet of retail space and luxury amenities including a five-level parking garage, a resort-style pool with water volleyball and an outdoor courtyard with a basketball court and grilling stations. Residents will have access to a 5,196 square-foot club house which will include a fitness center, free tanning, a computer café and gaming stations

A wonderful infill for the Indiana Avenue neighborhood, this market-rate mixed-user is raising the bar on downtown rents -units ranging from $1000/studio for more than $2550 for 4 beds. With an surplus of new residents arriving from the Axis/future Pointe and Collegiate projects, the Ind. Ave district may begin to feel like an authentic neighborhood -inflated rents indicative of a healthy demand in the downtown housing market. Perhaps no other neighborhood in the city is primed for such a resurgence as Indiana Avenue with its advantage of a Canal locale, proximity to IUPUI, and a rich history anchored by the Walker Theatre. On my short wishlist would be perhaps replacing a traffic lane with two protected bike lanes and using increased density to transform the avenue into walkable, vibrant campus village. 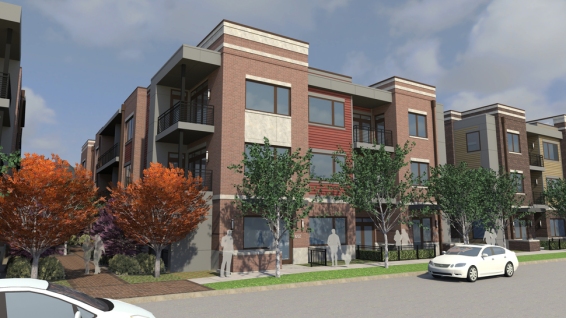 A for-sale condominium and townhome community in the historic Chatham Arch neighborhood and is the most recent new construction project of this scale in the area. This project will contribute nicely to the street wall/density of 10th St.

An exciting and much-welcomed addition to the St. Joseph neighborhood! With the advantage of historic rowhouses, a terminated vista (East/Fort Wayne/Central), and one of the most walkable corridors in the city (Alabama from St. Clair to 11th), this near-northside infill is a perfect for one of Indy’s oldest and most urban hoods. Hopefully, a convenience store or public house takes up some of the retail component -this would establish the Alabama corridor as a true urban node.

30,000-square-foot addition to the 109-year-old Marott Center. The addition would front both Mass Ave and Vermont Street but would be listed as 333 N. Delaware St., the address of the surface lot. The addition will feature 7,500 square feet of retail space on the ground level.

Delicious infill project on the soon-to-be former site of Fire HQ. The $50 million development will include 236 apartments and 37,000 square feet of retail to the 500 block of Massachusetts, increasing the district’s retail space by about 25 percent.

Located just north of Milhaus’s Circa Apartments, 747 College will be a boutique living and shopping destination. Right on Mass Ave, the five-story mixed-using building will include 9,000sf of ground floor commercial space, 51 structured parking spaces, and 39 apartments. 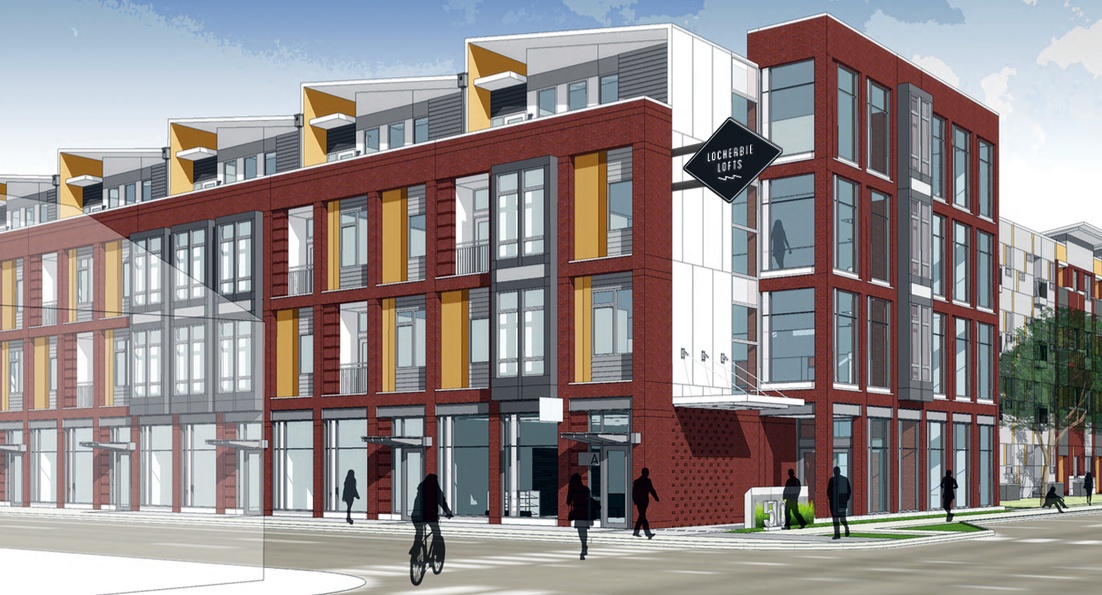 A new $28 million apartment complex located on the northwest corner of North College Avenue and East Michigan Street. The complex has 215 market-rate apartments and 9,000 square feet of retail space, in addition to a 240-space underground parking garage. The retail component begins at the corner of College and Michigan and runs west along Michigan.

Proposed infill in Mass Ave district rising to more than 4-5 stories. If the project is built as proposed, it should add a great deal of density to Lockerbie and an influx of 300-400 residents to the Mass Ave neighborhood, further bolstering the potential of street vibrancy. 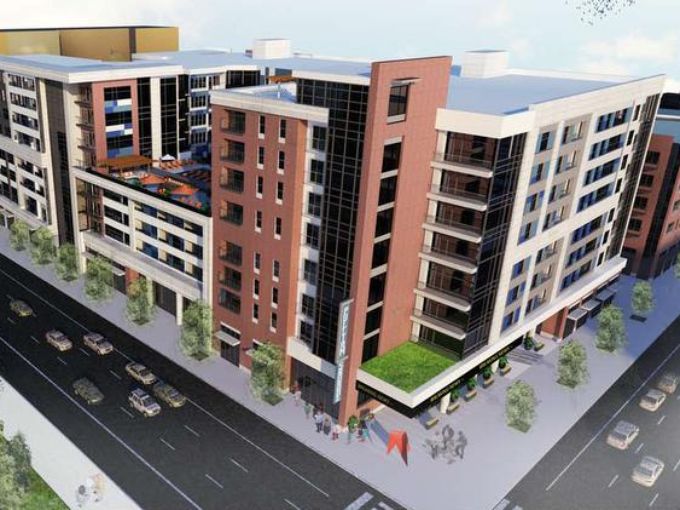 The former Indy Star site will be transformed into a $60 million complex with 335 apartments and 5,000 square feet of retail at the corner of Penn and New York. Supplemented by a new protected bike lane on Pennsylvania, hopefully the projects helps to bring a commercial presence to Monument Mall.

Buckingham Companies recently released plans for phase two of their ambitious redevelopment of south downtown. The $110 million project will add more than 450 apartments and contribute to connecting the Eli Lilly campus and Fletcher Place to the central business district. Of particular note in this rendering is the addition of what looks to be an 11 story tower to the north garage, a definite welcome addition to the south downtown skyline. 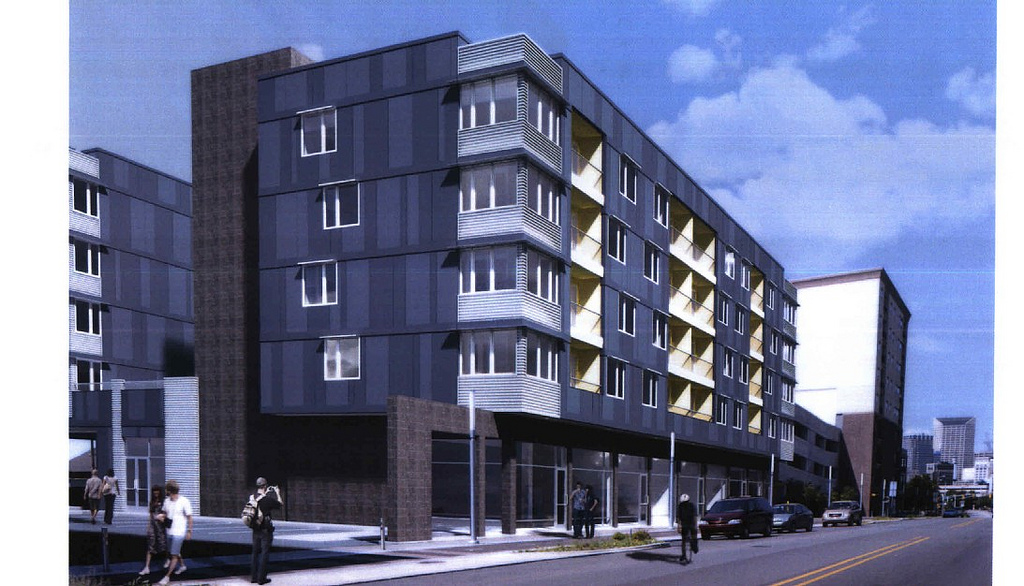 “The ground floor will include 9,900 square feet of commercial storefront space that will open directly onto the popular Virginia Avenue leg of The Indianapolis Cultural Trail. The top four floors will include 68 apartment units (many of which will have skyline views) and a shared fitness center that overlooks the southern portion of the trail.” Deylen Realty

This development will include 4,000 square feet of retail space along Shelby Street and 64 market-rate apartment units above. A two-story parking garage, with one level underground, will provide 70 spaces for tenants. About 55 surface spaces would remain behind the apartment building for public parking.